Cambodia is quite a bit different than Thailand - which was evident from the first day we arrived in the capitol, Phnom Penh. Poverty seems more prevalent, there's certainly less development, Westerners are far less common and the country as a whole still appears to be healing after many a political scar.

Phnom Penh is a microcosm of the rest of Cambodia, still showing signs of the iron-fisted regimes that ruled the country not so long ago. In the 60's, PP was on the verge of becomming a modernized, charming, bonafide capital city before Pol Pot and the Kymer Rouge (with the aide of the US Government -- gotta love our track record in supporting demonic despots!) set it back decades, evacuating 2MM people and turning the city into a prison camp.

The four of us made our way to the prison itself -- now a memorial to those that died there from 1975 to 1979 -- called Tuol Sleng, the "museum of genocide". needless to say, a heavy, heavy place. the prison was known simply as securtiy prison 21 or s-21 for short and was housed in a former grade school.

it was a powerful experience. interuments of torture, mug shots of the thousands that were interned (and soon murdered) and gruesome images of what took place in the cells 20+ years ago served as a chilling testament to man's inhumanity to man.

needing an uplifting change of scenary, we grabbed a tuk tuk and headed to Wat Phnom in the city centre. the highlight of the excursion had to be janet (a self-proclaimed "monkee") "attacked" (or at least grabbed) by the real deal. "monkaffinity" 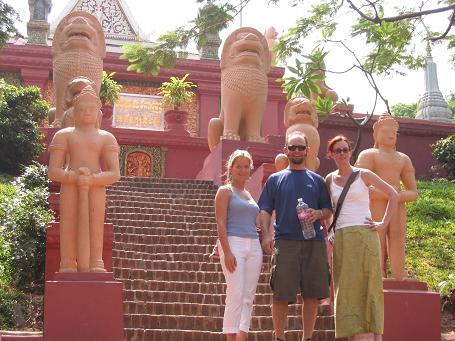 Next we headed to the Royal Palace and Silver Pagoda which featured an eclectic mix of architecture, from traditional Cambodian to 19th century French. The experience was hurt a bit by our overzealous (but well-intentioned) tour guide, who insisted on showing us every inch of Palace and Pagoda in the 95+ degree
heat ("Lady! Look over here!", "Lady! Stand here Lady!Lady, here!").