After our 5:30 AM wakeup call we quickly learned that the open-aired Land Rover can be a wee bit nippley during winters in the Bush. 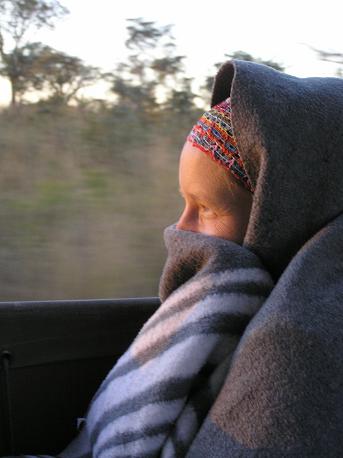 Wifey, in a desperate attempt to beat back the cold

Thankfully the cold did not keep the animals away and between the morning and afternoon drives we hit another of the big five – the elephant (a small herd actually). We also caught a glimpse of giraffes, warthogs, hyenas, a host of eagles (Marshall, Tawny, African Fish) most of what we’d seen the prior day (with the exception of buffalo) and a few hippos who, while they are not a member of the club, are responsible for more human fatalities than the Five combined (never get in between a hippo (hungry, hungry or otherwise) and a watering hole!).

Dazzled by all we’d seen, we hastily headed back the park entrance lest we be fined for being in the park after dark. Fortunately (as it turned out) the direct route to the exit was closed, forcing us to take an alternate where we happened upon the second most elusive of the big 5 – the leopard. He only staid with us for a moment, then scampered off into the sunset. Needless to say it was thrilling!

The experience was only marred by the revelation that not only was our new digital camera not recording properly but had taped over the previous hour’s worth of material and remained inoperable throughout the trip (HUGE bummer…I’m SOOOO pissed at canon).